When They Shut Down or Won’t Shut Up 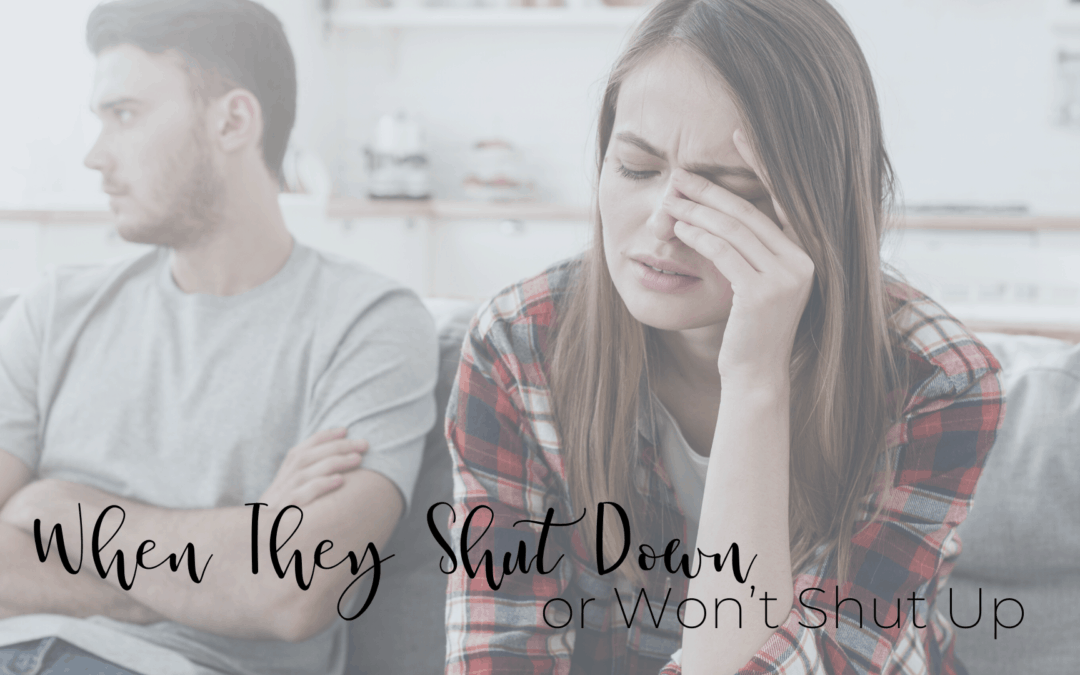 Good Communication can be tricky in almost any situation but in
marriage it can become almost impossible sometimes. Then there are
those times when it DOES become impossible. For one reason or
another, one or both spouses either shuts down or just won’t shut up.
When this happens, there is very little that can be accomplished. Let’s
take a look.

When Your Spouse Shuts Down

Or every time you begin to discuss an important issue, your spouse shuts down.

Your spouse has now locked themselves in the bathroom or bedroom or they have turned the TV on and they are just escaping and ignoring you.

Well let’s be honest- there is not much you can do at this point.

Trying to make your spouse talk usually doesn’t end up well. But you can’t just ignore the situation either.

So, we would like to share what has worked for us. This may not work for everyone, but we encourage you to try it and see what happens.

Also, if it doesn’t work the first time- don’t give up right away. We have found that when a spouse shuts down it is usually because the stress of the argument/disagreement/issue is too much for them.

They may be too angry and don’t want it to turn bad.

They might be afraid that you are too angry or will get angry.

Maybe they are afraid of the whole issue. Or maybe they just don’t know what to do or say.

We encourage you to sit down and write a note to your shut-down spouse. Not a letter, but a note. A note that just explains how you are feeling and asks them one or two questions.

This is just an attempt to open the door to communication again.

Your spouse has closed the front door, so now you are trying to enter through the window with a note. A sample note might look like this:

I am sorry that you are uncomfortable talking right now. Is there something I did that caused you to shut down and not want to talk with me right now? What can I do so that we can continue this conversation and bring resolution to this issue? Please write back and let me know. I love you and want to be at peace with you.

Now it might seem like you are taking responsibility by asking what you did to cause them to shut down. But you really are not. You are just approaching it from a different angle to get them speaking again.

Their response isn’t super important at this point. They may not respond in the best way at first- but that is okay, because no matter what- they ARE talking now. Maybe not verbally, but they are communicating with you and now you have an opportunity to continue.

Continue with the short notes and additional questions and after some time, they will get tired of writing and will usually just come out and talk with you.

But make sure that you don’t get into an argument through notes.

This is not another way of arguing.

This is a tool to get your spouse talking again.

So, avoid arguing or getting into too many details about the issue through the notes or your spouse might shut that down too.

Remember that all of this is a process and we are not saying this is how you should always approach things. But in the beginning, this may be your only option.

When Your Spouse Won’t Shut Up

They just keep talking and arguing and won’t let it go.

Believe it or not, you do the same thing as when they shut down. Write them a note. This may seem odd. But while they are yapping away, you pick up a pen and paper and start writing a note and then hand it to them.

I know that you want to continue to talk about this and I also want to resolve this situation. But right now my brain is tired. I know that you have important things to say but I am just unable to process it right now. I want to respect you and what you are saying by giving you my full attention. Can we plan a time to talk more about this later? I love you and want to be at peace with you in this. When would be a good time that we could talk more about this later?

Again, the idea here isn’t necessarily to bring resolution to the issue or situation.

It is just to help establish a healthier way of communicating.

Many times, they will come to the same conclusion- that there isn’t much more that needs to be talked about.

This is what has worked for us and we encourage that you at least try it a couple of times and see how it works for you!

*So when will you begin to implement this? Let us know in the Comments Below!