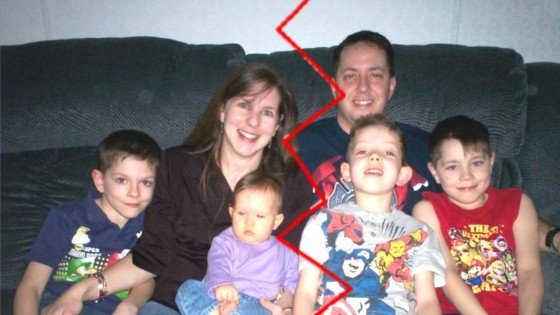 This family almost didn’t happen! We were separated 3 times in the first 3 years of our marriage. During our third separation, we were living over 600 miles apart for about 5 months with almost no contact during that time. As far as we were concerned, our marriage was over and we were headed straight for a divorce!

Today we have been married over 20 years, we have 4 beautiful children and I am the Senior Pastor of our church!

So how did we go from being unbelievers on the brink of a divorce to having a 20+ year marriage, being committed Christians and now ministering to other couples in crisis?

[shareable]We gave our lives to Jesus and He gave our marriage back to us![/shareable]

If you missed Part One of Our Story- you can read it HERE.

But more on that in just a moment– in Part One I said that our marriage was a “Match Made in Hell”.

Our marriage was truly horrific, we were both verbally abusive… mentally abusive… emotionally abusive… and yes, even physically abusive to each other and to ourselves as well. The police were called to our home multiple times and we were evicted from one of our apartments because of our fights.

One moment we would be screaming at each other and the next we would be all lovey-dovey. We would be slamming doors, punching holes in walls and then we would be kissing and hugging- and this would all happen in the same day- sometimes the same hour!

We were both dealing with a lot of different issues. Also the fact that we weren’t Christians and that we were trying to do all of this on our own didn’t help matters.

I Don’t Love You Anymore

One of the issues that we were both dealing with was insecurities. My wife struggled deeply with her self-image and that caused a lot of pain for both of us. As a result, she constantly questioned my love and devotion. Then one day she said to me the thing that would radically change our lives forever.

She informed me that she discovered a way that she could deal with her insecurities, she said that for now on:

She would just assume the worst of me!

On top of that, she said that not only would she always assume the worst of me, but she would never say anything about it and that we would just live the rest of our lives like that.

I was crushed! All of my hopes and dreams for our future were completely demolished. How could I go on thinking that we had a future when she would always be thinking the worst of me? Even if things seemed to get better- how would I know? She had said that she would never tell me any different.

At that point I just shut down. I was tired of fighting, I was worn out, there was nothing left- I just felt numb to everything. So I said it… I never thought I would say it, but I did:

“I don’t love you anymore… I want a divorce.”

If you don’t want to miss any of our posts, please join our community below and we will keep you updated on new posts and articles. *As a thank you for joining, we will send you our Newest Resource as a FREE GIFT!