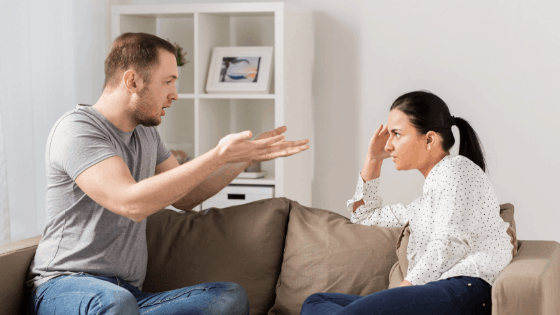 THE BLAME GAME- NOT FUN!

He said… she said… he did… she did…it’s the oldest game in the book. It’s the BLAME GAME— but it’s not very fun!

The blame game and pointing the finger goes well beyond our marriage. In fact, it is a game that every culture, every language, and probably every person on the face of this planet knows all too well.

It starts off as kids. If you have children, you already know what we are talking about! But even if you don’t have children- take a journey back in your mind to when you were a kid, or just look at any group of children today and you will see that they already know how to play the blame game.

Now if you grew up in a house with siblings- then you are probably a master at the game. Every child says it was “their brother’s fault” or “their sister’s fault”.

Eventually though, we grow up and we become “mature” (insert laughter here) adults! As adults, we only become better at the game. Coworkers blaming each other for failed projects. People blame the economy, or the government or their upbringing. And speaking of the government- every person who takes office seems to blame the problems on their predecessor.

So, it only makes sense that we would naturally bring this into our marriage. The problem is that the blame game never produces anything but bitter feelings and strife. There are never any winners in the blame game and by its very nature- it absolutely can’t work in our marriage.

You see, the idea of the blame game is that you place the blame or “responsibility” of the issue on someone else. But if we are supposed to be “ONE” in our marriage and we blame our spouse- we are really just blaming ourselves. We can’t hurt our spouse without also hurting ourselves.

The key is to remember that when we point the finger, when we blame our spouse, we are also implicating ourselves.

A good way to remember this is that if you were to physically point your finger at someone right now, you would also be pointing at yourself.

Go ahead and try it right now- point your index finger out away from your body at some imaginary person in front of you. As you do that look at your hand and you will notice that the rest of your fingers are pointing right back at you!

Visually stamp that image in your head. Keep that in mind the next time you are tempted to play the blame game or point the finger.

Of course, this isn’t to say that our spouse is perfect or that they never do anything wrong. But, until, we take responsibility for and ownership of our own actions and the way we relate in our marriage, we really have only one person to blame and that is our self.

*How can you begin to take responsibility and ownership for the success of your marriage?  Let us know in the Comments Below!